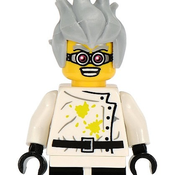 How do you hide a surveillance van in a city without any suspicions? Disguise it as a garbage bin of course! The lego surveillance garbage bin is the most unsuspecting surveillance van ever, mostly because it a) isn't a truck and b) who likes garbage? Lift the lid of the garbage bin to view the computer monitors, controls, and a 360-degree swivel chair. The bin has hidden wheels on the bottom to cleverly drive through alleyways and roads and a cleverly hidden camera on the back of the bin! Use this as a cool add-on to your lego city(if you made one).