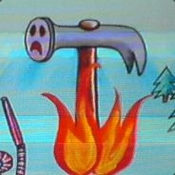 Come on down to Mega Bytes, the local cafe that's also a video game arcade!

With the exterior inspired by Victorian tenement architecture, and a large sign in the style of the Pet Shop/Detective's office, this building will fit right in with the existing LEGO modular building range.

The ground floor is where you can grab a coffee and a sandwich, with the kitchen area kitted out with a panini press and an espresso machine, along with a fridge and storage under the stairs. There are also some old-school pinball machines to play while you wait on your order. For decoration there's the large mural of a UFO invasion and a fetching tetromino patterned rug at the entrance. Out the back is where the dumpster is to take out the trash after a long days work.

The first floor is where the fun stuff is, with two arcade units; one a regular kind and the other a light gun game, along with two televisions to kick back and relax and play some console games with your coffee. The games console even has removable cartridges in case your minifigure gets bored of one game and feels like something different. There is also additional seating on high chairs so people just there for food and coffee can watch others while they eat.

The penthouse has been left bare to add your own interior like the old modular buildings. It could be an apartment for the owner, or another level for the arcade, or something else entirely.

Although the model was made in LDD, considerations were taken to ensure the number of elements that don't exist in available colours was kept to a minimum. The brick count is roughly 1100 but this could be cut down with further optimisation of the wall building structure.

This model was inspired by a a cafe in Glasgow that I often go to, also called Megabytes, which caters to both my coffee and video game addiction... https://www.facebook.com/MEGAbytesglasgow