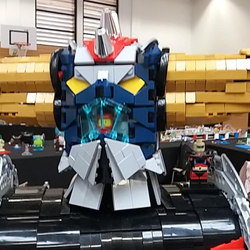 UFO Robot Grendizer, also known as Force Fice : Grandizer in the United States, is a Japanese Super Robot anime television series and manga created by manga artist Go Nagai. It is the third entry in the Mazinger trilogy.
The robot's first appearance in the United States was as a part of the Shogun Warriors line of super robot toys imported in the late 1970s byMattel, then in Jim Terry's Force Five series, both under the title Grandizer. It was widely popular in the Middle East, France, French-speaking Canada and Italy.
This head is minifig scaled so it allows Duke Fleed minifig to be placed in its pilot seat.
16