Glow In The Dark Spiral Galaxy 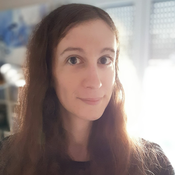 By Mia84
79 comments
I wanted to dig further into my idea of putting astronomy stuff into LEGO bricks. Then I discovered that glow in the dark colors were available for LEGO bricks. My imagination went racing and tadaa ! I came up with a new idea : making a spiral galaxy, comprising hundreds of billions of stars in LEGO bricks !
This model show the bulge, made of very old stars, cool, and reddish to yellowish in color.
It also show spiral arms of opaque dust clouds, punctuated by glowing pink gas areas where new stars form and tear the hydrogen molecules and atoms into ions and electrons under the action of their intense ultraviolet radiation. The glowing pink color is emmitted when those lonely hydrogen nuclei meet new electrons and reform atoms !
Eventually, I represented glowing blue freshly born star clusters on the back of the spiral arms. Their blue color is due to the few big hot and blue stars after all the dust and gas was consumed to form the stars that the clusters are made of.
Then, as the majority of a galaxy's stars are small, reddish to yellowish, the base structure is made of bricks of the basic "glow in the dark" LEGO color.
I used transparent colored bricks to alter the white/greenish light that comes off of the glow in the dark bricks, and obtain the needed yellow, pink and blue glowing colors. I hope this works !
As I rendered this with Studio 2.0 software that doesn't models the glow in the dark effect, I don't really know if this really works !
The stand that supports the weight of the model is simple and elegant, diplaying the title "SPIRAL GALAXY" in glow in the dark letters !

The Glow In The Dark Spiral Galaxy is built with 1104 LEGO pieces.