Battle for the Tablet of Destiny! 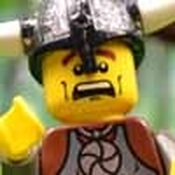 Battle the evil Kingu to free the universe!

The Tablet of Destiny gives whoever controls it ownership of the cosmos, and it has fallen into Kingu's (left) possession! With it, he and his master, Tiamat, an ancient dragon who wants to destroy humanity, will be able to carry out their evil plan to rebuild creation. It's up to Marduk (right), the king of the gods, to take back the Tablet of Destiny from the Temple of Ages and save the universe, but will he be able to stand up to Kingu and his shadow-powered Dragon Saber?

The set features 2 minifigures (Kingu and Marduk) and consists of 208 bricks, 181 of which make up the Temple of Ages. The purple elements are meant to add an otherwordly effect to the Temple (this is a battle for the cosmos, after all!) and so I chose to make it seem like it is sitting on some kind of energy vortex, that appears to be tearing the lower Temple and stairs apart. The different elements, represented by the transparent colours, are also a fun addition. Shadow is not an actual Babylonian element (while Sky is, along with Sea, Earth and Wind) but it is not too much of a stretch to add Shadow to this elemental system, considering how the elements were adapted to fit themes like BIONICLE and Ninjago (both of which inspired this build to a degree).

If this was made into a set, I imagine that the Tablet of Destiny itself would have some printing or a sticker, to add the detail of the 'writing' on it. In mythology, there were actually three tablets, all written in the ancient language of cuneiform, that acted as a legal document giving whoever owned them ownership of all of reality.

This is a scene more or less taken from Mesopatamian mythology, which is as rich and vibrant as Greek or Egyptian myth. There's also the potential for stylization and to extrapolate on the material, as many films, books and other media have done with Greek (or more recently Norse) myth. The minifigure for Kingu is actually based on an ancient carving of the god that I found in one of my old myths and legends books, though I wouldn't call it totally accurate.

Many thanks to Umbra-Manis for the high quality renders of my model!