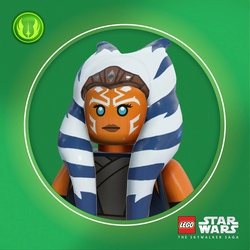 Straight from the fourth season of Star Wars: The Clone Wars comes the Battle of Dathomir!  The Separatist Droid Army, led by General Grievous, has attacked the fortress of the mysterious Nightsister witches.  Mother Talzin and Asajj Ventress lead the defense with all of the magic they have at their disposal.  But will they be able to defeat the battle droids with the Count Dooku voodoo doll and undead Nightsisters, or will Grievous wipe the witches out with the defoliator tank with firing weapons?  You decide!

This project contains some important elements from one of my favorite episodes of Star Wars: The Clone Wars, "Massacre"!  The Mother Talzin minifigure would require a new hairpiece to represent her hood, and possibly a new cape.  For the Nightsister blade, I used Bilbo Baggins' sword from The Hobbit.  As you can see in the provided image, this is actually pretty accurate!  The Nightsister bow should have two colors: dark gray for the handle and translucent pink for the arrow and string.  The Undead Nightsister was the hardest to design.  I wanted to use skeleton parts to represent the boniness of the zombie, but the minifigure also required clothes.  I ended up using a dark gray skeleton body with dark red boot legs and a dark red minifigure vest to represent clothes.  If this idea is produced, LEGO might consider creating a new torso piece with clips for attaching skeleton arms, and the legs could be attached to the clip torso used for the Clone Wars-style Darth Maul minifigure.

To design the Dathomir graveyard tree, I used one of the included concept images.  As there were designs for five different trees, I combined elements from each design to create one tree.  Considering how difficult it is to create natural formations using LEGO bricks, I think I did a good job.  A string with studs at either end (perhaps in dark red) would be used to hang the burial pod containing the undead Nightsister.  Here, the pod is represented by a brown cocoon from Galaxy Squad, though a spider cocoon from The Hobbit would also work.  If two undead Nightsisters are included, there would have to be room on the tree for a second burial pod.  Or, a second tree of a different design could be included, which would be even better!  This would bring the piece count to about 1,000.

The Nightsister fortress consists of two parts: the altar on which Darth Maul is resurrected and the hidden cave.  The altar uses studs and tiles to create a surface on which a minifigure can lay.  The cave entrance, being a natural formation, was hard to design.  The entrance can be "blown off" by turning the red nob (this site won't let me use the correct spelling) on the side.  The entrance is divided into three pieces topped off with tiles, so they can come apart easily.  The cauldron in which Mother Talzin creates the Count Dooku voodoo doll (a lime green minifigure trophy) is filled with lime green studs.  Pulling the yellow nob on the side causes the cauldron to tip over.  The entire fortress stands on translucent light blue plates that represent the magical swamp water.

The design for the Defoliator Deployment Tank (DDT) is based on the AAT from 2009.  I took inspiration from the AAT from 2015 and added new spring-loaded shooters that can be fired by pushing the buttons on the back of the model.  The side-mounted blasters are flick-fire missiles and can be aimed.  The top hatch can open to reveal the cockpit with seating and controls for a battle droid or minifigure.  The defoliator cannon is made of gold elements (as that was the closest color) and has a clip to attach a battle droid gunner.  The cannon can fire a large spring-loaded missile.

Please support this idea and be sure to check out my other project, Yoda's Jedi Interceptor!  Also, check back for news on my next project, the Jedi Temple!  I have completed the exterior and am working on the interior!