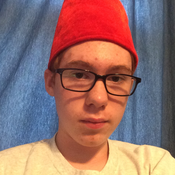 Hello there, my name is BrickConductor. This sort of thing is where I got my name.

This is a model of a real life steam train, one of only 2 Pere Marquette Berkshires left in existence. It is a 2-8-4 Steam engine with a 6 axle coal tender. This engine can be found on display in Grand Haven MI. In fact, it’s brother Pere Marquette #1225 was the inspiration for the locomotive in the Polar Express movie!

This model features full cab interior detailing including levers and stuff. Fireman and engineer figures included. This model uses no illegal building techniques. The flexible hosing that has been cut has been in several official sets where you are actually told to cut it. (Most recently the Achitecture Seatle Space Needle, I think.) It has moving connecting rods, a cowcatcher, a bell, coal, and grab irons. Unfortunately due to the motor configuration, I had to make the tender 4-axle rather than 6-axle. NOTE: This model would require a ballast brick to prevent wheel slippage, but since i don’t own one i substituted dead AAA batteries. The stickers were made with Microsoft word and glued on with tacky glue.

This train utilizes 2 power functions train motors to run it. Yes, it can make it around the ridiculously tight lego curves. The on/off button is cleverly disguised in the coal. (Just for fun see if you can spot it! Most people can’t lol) It can pull multiple cars at a reasonable speed.

-took a week to build

Thank you for your time, have a wonderful day.