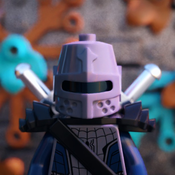 First image was rendered by ArmoredBricks! Go check him out!
Tolkien wrote The Hobbit and the first two volumes of The Lord of the Rings while teaching at Oxford
University.
I wanted to do something different for Tolkien and decided to make a modular style building instead of just a fancy stand for his minifigure. The building is not a specific structure in Oxford but instead a generic build with different elements of  Oxford-styled architecture. Unfortunately, due to my current lack of software, some of my pictures aren't the best but special thanks to ArmoredBricks who kindly rendered an amazing photo for me!
The Minifigures:
3 Students, Loosely based off me and two of my friends.
An Oxford Professor
C.S. Lewis, Tolkien's close friend and author of The Chronicles of Narnia.
Edith Tolkien, Tolkien's wife.
Christopher Tolkien, Tolkien's third child. He comes as a kid in this set, but he later edited most of his father's posthumously published work.
J.R.R. Tolkien, The creator of the magical and timeless world of Middle Earth.
The Build:
Left building (from bottom to top)
Archway
Classroom
Tolkien's Office
Right building (from bottom to top)
Library
Dorms (Left: male students' dorm with pet mouse. Right: female student's dorm)
It also includes a small stone bench.
Note on Prints:
You probably noticed that this set includes some nanofigs. Those will be action figures of Lord of the Rings characters. There will also be sketches of Middle Earth locations and characters on 2x2 tiles. I really want to take advantage of the LOTR license in this set.

The Road Goes Ever On And On...
While this set is partly me experimenting with different techniques and the Lego Ideas platform, it's also just as much a tribute to J.R.R. Tolkien and his inspiring legacy.
I hope you liked this set! I have a big project on the way (which, ironically, is heavily inspired by Middle Earth) and next time I'll also have better pictures. /:
Until We Meet Again 👊