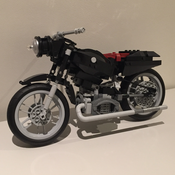 The Idea:
Ideas can come from anywhere! One day when I was just sitting around building a jet out of LEGO when I heard a lot of motorcycles outside revving their engines and riding along my street.  My jet was kind of bad (not gonna lie), so I thought of a different thing to make. Maybe a spaceship? Or maybe something with wheels...
Then one thought led to another and ever since then I've thought of making a motorcycle MOC.
I was finally able to make it, after lots of thought, piece scrounging, and accidentally stepping on Technic bricks.  I call it the Ravager because, well, it sounds cool. So, here it is!
The Build:
-I used some pieces which most people probably wouldn't use, like the cannon piece as the large pipe.
-The biker minifigure uses dark blue leg pieces. The head is that of the rocket kid from Minifigures Series
-I made a basic Technic frame with lots of attachment space for the rest of the details. Then I added them   and tweaked some parts.
-The fusion engine at the bottom part of the bike was from a robot head I made earlier. (irrelevant)
-The pipes were from the BTTF Delorean Time Machine set 21103.
-The bike has suspension on the front wheel from a simple Technic technique
-The wheels are from the LEGO Ninjago Jungle Racer set
The Build Process:
The whole project took me around 5 hours non-stop (apart from bathroom breaks because that's important). 3 hours of that was from finding the pieces (no building software used), and 2 hours for the very frustration but rewarding build. I also spent half an hour the next day laying the finishing touches and taking the pictures you see above. (I don't use any fancy background or photograph editing app)
The Credits:
-Builder: RetroBuilder11.
-Designer: RetroBuilder11
-Original Idea: RetroBuilder11
-Photos: RetroBuilder11
The Please Support This Model It Only Takes A Moment Of Your Day:
-Please support this model it only takes a moment of your day. (Well if you like it)
To support, click the blue button with 'support' on it. If you do not have a LEGO account, sign up and start building!

With this bike, your minifigure will be the talk of the city! (And you'll be as satisfied with this on display!)
Buh-bye for now! -RetroBuilder11