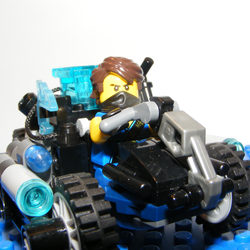 I made this battle rover because there is a lack of small transforming vehicles in Lego.  Cool features, like: ability to tow vehicles using rope (shown in additional image 1), ability to transform into a hovercraft (shown in additional image 4), six on-board weapons and two detachable pistols.  If you need an all-terrain weaponized vehicle, this is an optimal design!