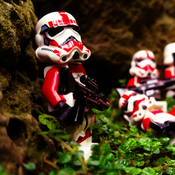 Welcome to the future of racing! Start your engines with the Mark VI craft from Team FEISAR! The team at FEISAR (Federal European Industrial Science and Research) introduce you to the latest race entrant into the FX7200 racing league. Take on the competition across the league, with its superior handling and acceleration, the opposition won’t stand a chance on technical tracks. Get behind FEISAR in the FX7200 racing league today!

After all, FEISAR is fair!

Coming in at 487 bricks (with stand) it is a great sized representation of the team craft from the gaming series Wipeout. This model comes specifically from Wipeout 3. It’s roughly 1:35 scale at over 30cm in length and over 12cm in width. I choose this ship to model as I sought to challenge myself with replicating my favourite ship from the game.

Due to the limited details available I best replicated it as I could with some minor changes. The canopy is black (which I don’t actually mind) as much as, I would love a translucent canopy representing the original model. In Image 10, the canopy opens forward by removing the 1x4 flat tile and then replacing the tile over the two studs on either end to lock it in position. As much as I would love a custom canopy to change how the cockpit is set up, I am running with this for now. (Potential updates on the horizon)

The angles were difficult to replicate and I’m hoping it is structurally sound with the supports I have used. A minifigure is included and does fit although extremely limited for space. The pilot and design with team logos is decorated with the teams main sponsors, and there will be limited stickers for decals for logos and wing trims (picture 14). The craft has a stand that it can be displayed on and movable air brakes.(picture 10) Hopefully you enjoy my rendition of the craft with my minor tweaks. I’ve tried stay as true as possible (yes some of the slogans are from other racing leagues). Hopefully there is room for more ships in the future!

With the piece count, I am hoping this will be in the $50 to $60 USD price range. I wanted to keep this set affordable whilst retaining detail.

Thank you for your support and please feel free to check out my other projects.

See you on the racetrack!