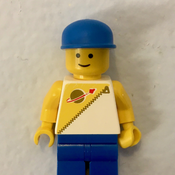 By Mr. Blue and Yellow
188 comments

Welcome to Fire Station Number Four! This fire station has two towers, a bell tower and a hose hanging/drying tower. Large glass doors rise to allow the fire trucks to exit. The station has a historic slide pole to allow quick access from the housing area on the second floor. A grand spiral stair is an additional way to move up and down. There is ample room for turnout gear storage at the sides. At the back of the bays there are areas to store tools, change radios, Fill SCBA and allow for hose hanging/drying from above. Moving upstairs you will find the living spaces, including a kitchen, a TV area, a radio desk, a bunk room, a shower room and a patio. The second story patio at the back is a great place to relax. Also, you will find access to the hose drying tower and a ladder to get to the top.  There is an additional exterior ladder to get to the roof and a hatch under the bell tower to gain access to the slide pole from the roof.  At the top level of the hose tower, hoses may be hung from pegs to dry. They hang all the way down to the apparatus bay where trench drains catch the water. Fire Station Number Four is a complete firefighting facility.

A fire engine with extra crew space and an aerial apparatus are housed at Fire Station Four. The station has two bays to house the vehicles. Large glass doors allow the trucks to be displayed when not in use. Each vehicle has special features. The fire engine has many gauges at the sides to measure oil pressure, pump pressure, system volts, and other important data elements. The fire truck has ample hose storage space at the back where the grey and beige hoses reside.  The aerial apparatus has a large ladder that can even reach the bell tower. Fire Station Four would not be complete without these two lifesaving vehicles.

Fire Station Number Four would make a great LEGO set! Everyone likes to imagine being a hero and this fire station allows us to imagine ourselves as firefighting heroes. The set has a lot of playable parts and that makes the set better. Helmets and SCBA can be put on firefighters. Tools and radio can be distributed. Hoses can be hung. Additionally, two fire trucks make this a superior fire station toy, they provide double the action and fun. Fire Station Number Four would make a great set because it has playable and movable parts that allow us to pretend to be heroes.

By Mr. Blue and Yellow
188 comments