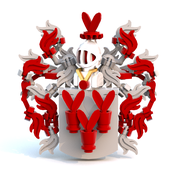 By The Half Blood Baron
29 comments
This is a model of a Roman Quinquereme. A Quinquereme is a type of warship that the Romans deployed for the first time in the first Punic war, after copying the design from their enemies. The Romans added a corvus to it, which is a ramp that was used to board other ships. The model is on minifigure scale. It has a ram in the front, which was used to ram enemy ships, it has about 100 oars as well as a mast and it has small wheels on the bottom, so it can move smoothly across a surface.
The reason I built this model is because I have always liked classical antiquity and since Lego has not yet had a Roman republic/empire theme I figured now would be a good time to have one, since the Colosseum released fairly recently. So I designed this model in the hope that a Roman theme can be made.
The reason I think this makes a good set is because apart from the fact that it would combine well with the Colosseum, it also fits neatly alongside the other historical ships that Lego has released in the past, such as pirate ships, a viking ship and of course the Titanic.
I hope that this model makes it to 10.000 votes so this ship can become a real set.

By The Half Blood Baron
29 comments