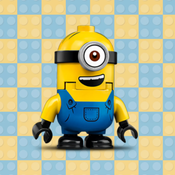 The crook crept out of the museum window, the precious jewel in his hand. “At last! he thought,” after years of trying, it’s mine. He scurried away into the darkness and climbed into the waiting helicopter. The engine roared, sputtered, and died. Alarms blared. Finally the engine roared to life and they shot off into the night. But they were too late. Another helicopter was on their tail. The two helicopters twisted and spin and flew around and around, both pilots equally skilled. He chase was on! These super cool helicopters have three minifigures along with accessories just for them! It also has whirling chopper blades, 4 on the police helicopter and 2 on the crook’s. On this build, I liked building the front of the crook helicopter. The hardest part was getting the crook helicopter’s front to look good, while still making enough space for the minifigure to sit inside