Hi,this is my Police roadblock.

I built it,because I think that Lego City Police Department need some small construction to check traffic and work as a meeting point for policeman far away from the main Police Station.

I think this could be a great set,because it's innovative,different and never seen;and it could be an alternative for the traditional Starter Set and it could be a nice starter pack that can be a roadblock,or a toll both on a motorway,and due to its cheapness,you could have different basic things for a low price.

This set can be divided in three parts: the police box,the vehicles and the road.

The police box is an essential building to store tools and as a small area for policeman far from the Police Station to rest and to receive orders via PC or telephone included in the building.
There is a coffee maker,a baton,some handcuffs,some walkie talkies,a camera,a binoculars,a torch and a megaphone. There are two signaling disks and a bone for the dog too. 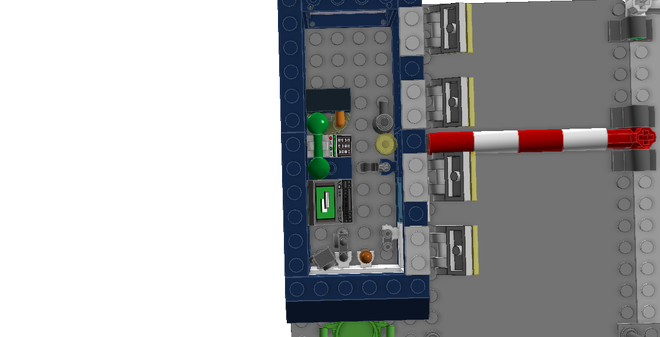 There are two road plates:one as road and one as parking lot for the police car. There are two bars to block cars,two signals (one stop and an alert one that should have stickers,due to improve texturing).

There is also a space for the police dog with its bowl and a green waste basket.

There are three vehicles:

The policewoman has an high speed police bike. It's the standard police piece in a hearth blue colour,with a high police light and some attachments for some tools.

The police car is a two-seat automobile with a sporty design. It has two attachments for tools too,and some small space in the back mirror.

The green car is the green guy's vehicle. It's a single-seat automobile with a sporty look.

There are four minifigures plus a dog. 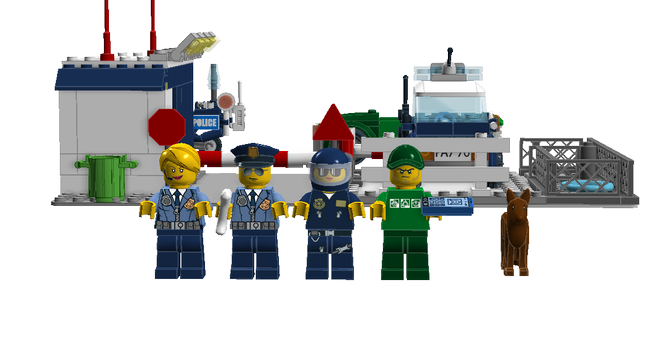 There is a normal policeman and a normal police woman,a bike cop and a normal guy which drives with his mobile.
The policeman should drive the car and the policewoman with the earpiece should stay in the police box,but you can change roles and swap faces between the minifigures. You can choose between an american looking policeman and a standard Lego Crook face;or you can have an angry cop and a young driver... let your imagination run wild!

Sticker should be included to have a nicest set.

For any suggestion or questions,please let me know in the comments!

P.S.: please support my other projects too! Thanks in advance.