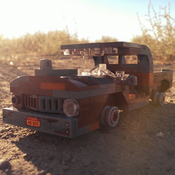 After a long drought of justice in the Wild West, there’s finally a new sheriff in town! Sheriff Studlee and his deputy are looking to bring order back to the lawless Legoredo. They’ve already struck the first blow by putting the dastardly outlaw Billy Bricker, leader of the dry clutch gang, behind bars. The victory is short lived however, as the remnants of the dry clutch gang are looking to break their fearsome leader out of jail. Can the Sheriff keep his reputation as piece keeper and save the day, or is Legoredo doomed to disarray!

Aside from being a fan of the western genre and the numerous western movies I’ve watched, my inspiration for building this creation was largely based on the old Western line of sets from the late 90’s. While I was a bit too young to have actually owned any of these sets at the time of their release, I’ve still always admired the Western theme since I first started to get into Lego and feel that a return to this theme is overdue. One set that stands out to me in particular is the Sheriff’s Lock-up, and so I decided to try to build my own adaptation of it. Overall, it came together quite well and turned out better than I ever expected it to, so much to the point that I believe it’s worthy of becoming an Ideas set. But if nothing else, I hope it inspires others to revisit this lost Lego theme and maybe bring it back some day.