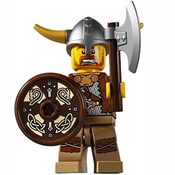 By VikingBrick
84 comments
The Pirate Republic is a nod to the Republic of Pirates, the pirate base in Nassau, Bahamas, in the early 1700s. The republic was run by the pirate code during the golden age of piracy. I created a set for the pirates to dock at after the 2020 Black Seas Barracuda set came out. A beautiful ship needs a port to trade, rest, and perhaps unload some of its loot.
The set consists of a steep cliff that drops into the ocean. On the island, a dock helps pirates load their goods for trading. One unlucky pirate rests in the cave near the pier which doubles as a safe-hold for gold, silver, jewels, and whatever else can be hidden away.. On the main walkway is an office for governing and strategizing, a hotel, an open-air market, and a bar with a balcony overlooking the Caribbean sea.
I believe this would be an excellent complementary set to the 2020 Barracuda ship as the style and essence are about the same. Having complementary sets is a great idea to sell more LEGO and introduce a world, reminiscent of the 1980s and 1990s catalogs with beautiful ship and island visuals.
I hope you enjoy this set. I tried my best with Lego Studio to create the vision I had. I am sure when built in person it will realize its full potential.