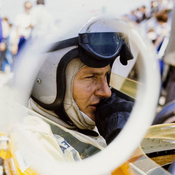 By Flatoutcloud_
33 comments
The mid 1960's vintage formula one car with first, basic aerodynamics package that changed the perception of performance in race cars forever. Car that represent the glorious, romantic, era of Formula One with brave, legendary drivers like Jim Clark, Jackie Stewart, Jack Brabham, Bruce McLaren, John Surtees and so on.
My build features V8 engine stylised to be Cosworth DFV with white engine trumpets and exhaust manifold piping, sequential 2 gear transmission linked with differential to become full powertrain with engine, full independent short travel double wishbone suspension and working steering system of 180 degrees of rotation. It also includes full interior with gear selector, simple gauges, round steering wheel, simple seat and three pedals of course.
The overall shape of the driver shell and front of the car is set to look like a typical racing open wheel car of its era, with small, side-front winglets and on the uncovered back of the car the deep rear wing with small endplates. On the side of the car next to seat is located a fuel neck to fuel system. The black fuel tank lies under the seat and fuel lines are carried out under of the engine.
The vintage F1 car is what the LEGO F1 models is lacking, so be sure to give me a chance to change that ;)