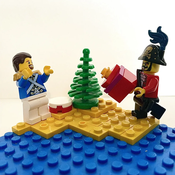 By ValiantDrillex088
89 comments
The next port modular has come.
The fort was taken from the Spanish by the Bluecoats, and transformed into an outpost to defend a nearby port. Now a pirate captain is held in the dungeon, but his accomplice is on his way to release him. Will he succeed in his rescue.
The build is between 2500 to 3000 pieces, and contains 8 minifigures. The minifigures include three bluecoats, two pirates, two villagers, and one maiden. With many details packed in the build, the reserve contains many noticeable scenes and equipment that all pirate lovers will like and create their own adventures with. This is the next build in a series of a pirate port, and it will please all pirate lovers.