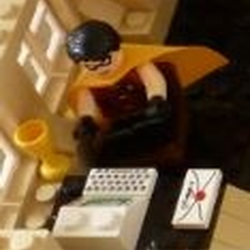 My son Michael and I have decided to make our version of Wayne Manor and the Batcave .

Following a raid by RHAS Al Ghul and his henchmen the renovations are not completed in full and is rebuilt Wayne Manor something and expanded the Batcave .

In Wayne Manor Bruce Wayne, the butler Alfred und also Dick - well known as Robin - are waiting for a call of commissioner Gordon.

Under the bureau - with weapons - and under the living und sleeping rooms there is location the Batcave. There is standing the BatPod.