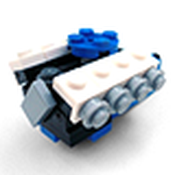 By gotoandbuild
9 comments
Lets start with the female manager doing a smokey burnout and the entrance to the service bay.

More photos on the Flickrs. 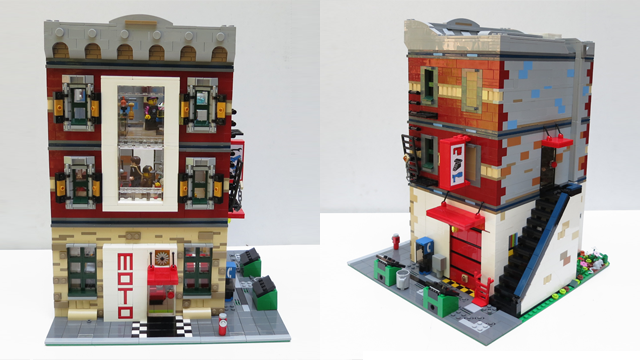 This building was an old warehouse that's been rennovated. The service bay, with brick-built doors, is down a narrow alley. The alley isn't in the best shape (looks like someone has been doing burnouts in the alley as well); the city's budget is stretched so there is no money to repave it. The alley also has two dumpters, which hide the technic connectors used to connect to other modular buildings, pay-phone, utilities control box, and the service bay entrance. The brick-built shutters do close when pushed together.

Around back we have the stairs leading up to the second-floor showroom and the HVAC system that feeds the first-floor service bay. There's also a small patch of wild growth outback with Mickey-the-rat, the shop mascot. The new owners wanted to brick in both sets of windows on the side, but the Fire Marshall said they had to have fire escape access so they left two alone (the fire escape windows are offset in half a stud and align with the vertically-striped interior walls).

The back may look colorful, but when you look at the inside you'll understand why.

If you look in my Flickr Gallery you will see a side-by-side shot of it as both a regular and corner building. It would take very few modifications to remove the dumpsters and make it a corner building, I would imagine tht the alley would by tiled instead of rough. If approved I would like Lego to include the extra bricks to allow for this; which would make the set much more versatile in how you could use it in your layout. As far as the approximate size and pricing, it should be similar to the other modular sets around $150 USD. 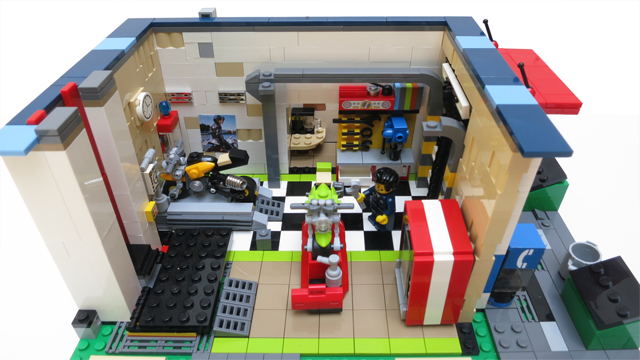 Lets take a look at the service level, clockwise from the left we have the elevator used to move bikes from the service bay to the second-floor showroom (you didn't think they would hump them up the stairs did you?); a dyno to tune the bikes; emergency fire equipment; vents for the HVAC I mentioned before; a poster of a cute girl on a Guzzi cafe racer; a back room under the stairs for Harry Potter... I mean the coffee maker and bathroom; the workbench with tools, drill press, radio and service manuals, and a coke vending machine (although you can't see it, I'm using a string-piece and a jumper plate to simulate the vending machine being plugged in). I removed parts of the overhead door rails for this photo. The interior walls still have their original brickwork even though the outside of the building was repainted. You can see the blue bricks that give the back of the phone booth its color 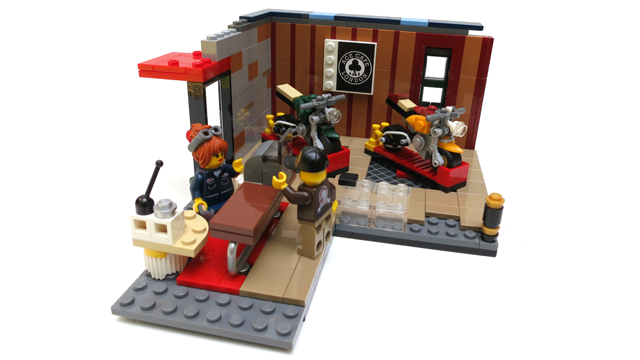 On to the second floor showroom. We have two more brick built bikes, bringing the total to four. You can get either the regular two-up version, or the racier sportbike with the solo seat. The red display platforms are on turntables so you can angle them any way you want. You also have the manager's office with table, clock radio, and register. Being that the manager is female, she decided to put up pleasing wallpaper, if she had left it up to the men the walls would have been covered with newspaper clippings and old Farah Fawcett posters. 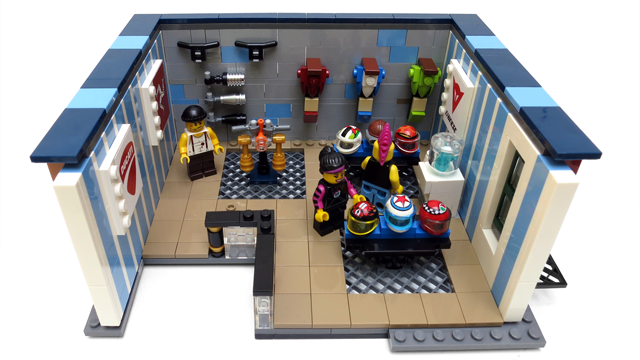 The third floor is where the real money is made...accessories. On the wall there are different handlebars, exhaust pipes, and custom bodywork. On the floor is a high performace front end to upgrade your suspension and some helmet displays.