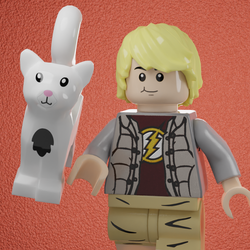 Welcome to the Lego Corner Gas project where there's not a lot going on. Settle down and grab some food from the Ruby Cafe or stop by the Corner Gas Station.

This was a lot of fun to build coming out with 1803 pieces, 8 minifigs ,a Corner Gas sign and one giant play accessable building! I've had the Idea of a Lego Corner Gas set for about six months and have been working on it for about that long!

Corner Gas is a 2004 sitcom. The show averaged around one million viewers per episode. Corner Gas was nominated nearly 70 times for lots of awards. This being said I think it would make a wonderful set for any fan of the show or even those who aren't!

How you can make this a set
That's right you can help this set on the long journey to 10K by pressing that big blue support button and if it gets to 10,000 supporters then Lego will look the set over and it has a chance to become an official set!
If you would like to leave a comment and share the project I would greatly appreciate it :D
103
13
days left