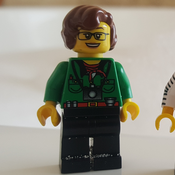 This proposed Lego set is based on one of the most fan supported television series of all times, Veronica Mars, which orignally ran for three seasons on UPN/CW from 2004 to 2007.  The television series was followed by a feautre film that was supported through a public internet fundraising campaing that raised the $2 million goal in less than 12 hours and went to to raise nearly $6 million dollars for the film.  A 4th seaons of the original show will begin on Hulu July 26, 2019.

This Lego set is different from other television series sets in that it includes part of the facade of an iconic buidling from the show: the Neptune (San Diego) building which houses Mars Investigations (Veronica's dad's agency).  Yet, this proposed Lego set is similar, and thus familiar, to other television sets launched in Lego Ideas in that it features one room from the series.  In this case, the one room is the Mars Investigations office where Veronica works answering the phone and helping her dad when she isn't out sleuthing.

This set wouldn't be complete without Veronica's dog who is cleverly named "Backup" and minifigures of many of the main characters from the first season including Veronica Mars, her dad Keith Mars, Wallace Fennel, Duncan Kane, Logan Echolls, Eli "Weevil" Navarro, and Dick Casablancas.  Finaly, another fun feature of this set is Veronica's iconic black convertible Chryler LeBaron

I hope you will support this Idea and share it with Veronica Mars fans (the truly dedicated ones are affectionately known as Marshmallows).  To make it a reality, we need all the Marshmallows and their friends to support this project.  Thanks!!