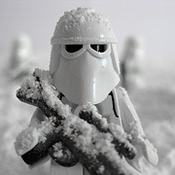 Before a very long time I started to collect LEGO bricks. Again and again I built with the LEGO bricks models from Star Wars. From the spaceship up to small building, nothing was missing. My dream is a model directly by LEGO to see originating. Allowedly, a dream of many. But a package, on the top stands LEGO and I was the builder, is a very big dream.

So I build my third project. A Vaporator for a humid farm on the planet tatooine. Thats my favorite planet from Star Wars. So, I think, its time for a model from a Vaporator. In addition a few explanations:

On the planet Tatooine Luke's home is a humid farm. So the farm needs vaporatores. My Project is a typical vaporator (ZX-45).

Primarily a vaporator condenses at the chill nights on extremely hot planet the humidity of the air and collects the won water in subterranean tanks.

An average vaporator is able to win daily a quantity of water up to 1,5 litres and costs about 500 credits.

My model have 479 bricks and have currently no minifigures, but possible I think, a minifigure from Owen and Beru Lars and Luke Skywalker. Maybe for a update.