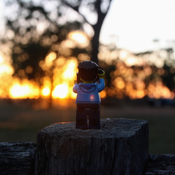 General Electric aircraft engines have been know in the aviation industry for a very ling time. Engines powering the Boeing 747, 757, 767, 777 and 787 and most Airbus aircraft. The company is also known for making the largest aircraft engine in the world! The GE9X, Going to power the upcoming Boeing 777X

Change the engine from Testing to In-service

This engine represents the GEnx 1/2B Engine.

This model would have to be one of the first Aircraft Engine Lego Sets proposed to Lego Ideas. I know it is only an LDD image but in future updates, you may see it in Lego form!!