TheBrickLife
4
Calypso was Jaques Cousteau's exploration ship.
Combining this historic ship, a huge figurehead in the science and adventure of ocean exploration with a submarine, zodiac style boat, shark cage, helicopter, divers and more would make it a wonderful set - from a building/display and also educational viewpoint. It would also allow Lego to re-introduce aquatic animals to their ever growing animals range.

The image of the model above is by Revell.
Ships History

RV Calypso is a former British Royal Navy Minesweeper converted into a research vessel for the oceanography researcher Jacques-Yves Cousteau, equipped with a mobile laboratory for underwater field research. She was severely damaged in 1996, and is undergoing a complete refurbishment in 2009. The ship is named after the Greek mythological figure Calypso.

Calypso was originally a wooden-hulled minesweeper built for the British Royal Navy by the Ballard Marine Railway Company of Seattle, Washington, USA. She was made from Oregon pine.

She was a BYMS (British Yard Minesweeper) Mark 1 Class Motor Minesweeper, laid down on 12 August, 1941 with the yard designation BYMS-26 and launched on 21 March, 1942. She was commissioned into the Royal Navy in February 1943 as HMS J-826 and assigned to active service in the Mediterranean Sea, reclassified as BYMS-2026 in 1944, laid up at Malta and finally struck from the Naval Register in 1947.

After World War II she became a ferry between Malta and the island of Gozo, and was renamed after the nymph Calypso, whose island of Ogygia was mythically associated with Gozo.

The Irish millionaire and former MP, Thomas Loel Guinness bought Calypso in 1950 and leased her to Cousteau for a symbolic one franc a year. Cousteau restructured and transformed her into an expedition vessel and support base for diving, filming and oceanographic research.

Calypso carried advanced equipment, including one- and two-man mini submarines developed by Cousteau, diving saucers, and underwater scooters. The ship was also fitted with a see-through "nose", an observation chamber three meters below the waterline, and was modified to house scientific equipment and a helicopter pad. The Calypso underwater camera is named after this ship.

On 8 January 1996, a barge accidentally rammed Calypso and sank her in the port of Singapore. On 16 January, she was raised by a 230-foot crane, patched and pumped dry before being put in shipyard.

Calypso was later towed to Marseille, France, "where it lay neglected for two years." Thereafter she was towed to the basin of the Maritime Museum of La Rochelle in 1998, where she was intended to be an exhibit.
A long series of legal and other delays kept any restoration work from beginning.

In 2002, Alexandra, Cousteau's granddaughter from his first marriage, stepped in to help organize restoration. Yet the Cousteau Society, controlled by Francine Cousteau, reportedly spent hundreds of thousands of dollars to defend Francine's exclusive use of the name, and to prevent Alexandra's participation in the restoration of Calypso.

In July 2003, Patrick Schnepp, director of the La Rochelle maritime museum, expressed his frustration at the inability to restore the ship to fit condition: "The whole affair disgusts me... Everything that's not broken is rotten, and everything that's not rotten is broken." The Guardian reported that he desired to see the ship towed off the Ile de Ré and scuttled, as Jacques-Yves Cousteau had envisioned would have been the ship's original fate had he not been granted its use.

On 30 November 2004 it was reported Calypso had been sold by Loel Guinness, to Carnival Cruise Lines for the symbolic sum of one Euro. Carnival stated they intended to give the vessel a 1.3 million dollar (1 million euro) restoration, and then likely moor her in the Bahamas as a museum ship.

At the end of 2006, most of the equipment had been removed from her upper decks, and she was unprotected from the elements. It was unclear what would become of this historic vessel.

On 11 October 2007, the transfer of the ship to Concarneau started, where she will be restored at the Piriou Shipyard and transformed into a permanent exhibit.

Restoration work on the Calypso stopped in February 2009 due to non-payment of bills by Francine Cousteau. Piriou Naval Services of Concarneau are owed €850 000, of the estimated total €1 737 000, for work already done on the ship. The ship is now stored in one of the ship builder's sheds. 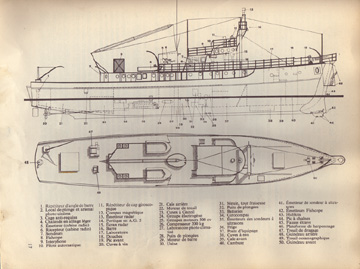