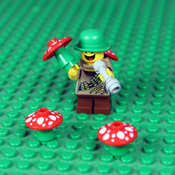 League of Legends (LoL) is a multiplayer online battle arena video game developed by Riot Games. It is currently played by over 27 million people each day.

This project is over 99% LEGO brick, the only exception is Pantheon’s shield. Every LEGO piece used in this is already in existence currently. These could always be improved if approved!

Minifigures included in this set: (Winners picked out  from the 20 minifigures that I created)

Nasus - the Curator of the Sands

Pantheon - the Artisan of War

Renekton - the Butcher of the Sands

I hope you enjoy the set and please Support this project and tell your friends!