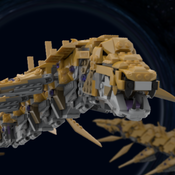 By Gremlin Gremlin
17 comments
What you see is what you get! Two horses and jousting knights attached to two sliding levers where you can joust with a friend and try to knock their rider off their horse.
Based generally on medieval jousting arenas, this could be a renaissance fair addition to a city, or a genuine attachment to a medieval village.
I've only included two minifigures here, but I had thought about putting the king in one tower and a queen in the other. Perhaps they're settling a bet?
There is a viewing area for minifigs, and the horses are lifted a stud above the ground to allow them to slide. The levers could be rotated up and down if you wanted, which means you could pull of some sick moves and dodge your opponent. Careful though, the minifigs are barely attached. Stay put!