WICKED The Musical: The Oz Head 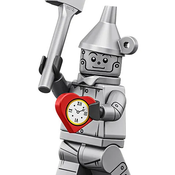 By BettingBricks
20 comments
For nearly 20 years, WICKED has been taking audiences all over the world on a spellbinding journey to learn all that happened before Dorothy dropped in. The winner of 3 Tony Awards, WICKED is one of the longest running musicals on Broadway with over 7,000 gravity defying performances in New York alone. WICKED is one of my favorite musicals and was my first Broadway show I saw in New York. As the 20th anniversary approaches it felt like the perfect time to celebrate this Broadway classic!
As an AFOL, I love how some of the new LEGO sets are focusing more on display than play, and have brought the artistic quality of LEGO to the public eye as a way to commemorate some of the icons of American pop-culture. I feel this set perfectly combines this approach to a LEGO set; a fantastic display piece that celebrates one of the most popular musicals of all time.
This 500-piece set celebrates Eugene Lee's Tony Award-winning scenic design and captures The "not-so" Wonderful Wizard's throne room alter ego. Turn the set around to get a peek behind the curtain at the secret controls of the fully functional mechanical head and use the green knob in the center to control and bring the Oz head to life! This set includes 3 minifigures: Elphaba, The Wizard, and Chistery.

Many Easter eggs and references to the musical have been hidden in the set as well including Elphaba's broom, a bottle of the Wizard's infamous Green Elixir, and the Grimmerie. I hope you enjoy the set! Thank you in advance for your support on the journey to 10,000!