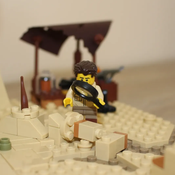 By Kamimurai
35 comments
Join our archaeologist on the greatest dig site he could ever dream of!
An ancient temple full of secrets, traps and treasure lies ahead.
Will he find the pharaoh's remains or will he fall under the spell of Anubis's statue?
But first of all, how will he get in through all the rubble? Maybe some secret access from above. Maybe a trap door causing a rock slide.
The dig site has everything an archaeologist thrives on:
The set contains:
This set which is built on a 32x32 baseplate can be used for displaying or to play with.
Hope you enjoy it and support it!
Thank you.