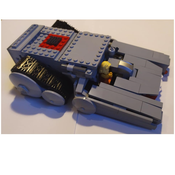 By 0bricksgiven
8 comments
The epic Thundercats with their Thundertank should enter the LEGO Universe. We are close to the Anniversary of the first cartoon 23rd January 1985.
Many weapons, hair, claws etc. adding to the minifigueres can be used from LEGO Chima. Of course The Sword of Omens would need a mould of its own or at least a one by one printed round tile adding to an existing sword.This very tile could be used with the belt buckles of the minifigures.
Similarly to the Ghostbusters where the LEGO Headquarters followed the epic vehicle here the Cats Lair could follow this epic vehicle as a set.