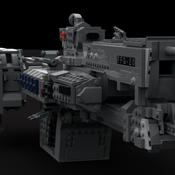 This is Halt's cabin from the book series Rangers Apprentice. The cabin has Halt's and Will's bedrooms, a kitchen with a secret compartment, a dinning room table, and fireplace. The cabin can also open lengthwise down the middle for easy access to most of the cabin. There are also two places for hanging cloaks, one in each bedroom, and a clip in the cabin for each bow. A stable is located next to the cabin, with Tug and Abelard and sadles for both of them. Will can do target practice with the stud shooter bow and target next to the cabin. If the target is hit with a stud from the bow, it will flip backward. Next to the target and stud shooter bow is a well with hanging bucket. The Mini figures include Will Treaty, Halt and Will's dog.