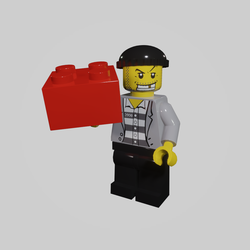 By Steinedieb
14 comments
What’s any child’s best friend? No doubt, a teddy bear! And what’s any child’s (and any adult’s) favourite stuff (that dreams are made of)? Also no doubt, LEGO bricks! So why don’t we combine these two fantastic things? Let’s build a teddy bear made of LEGO!
This teddy bear does not just look good and will be your child’s best friend; he even has a very useful function: he’s a piggy bank. The inner side of him is empty, such that your child can save money – why not for the next LEGO set? By turning the bear’s tail, a mechanism opens his body’s lower side, such that the money falls out, right into your child’s widely opened hands. Due to worm screws blocking the gears, this doesn’t happen automatically, that means, the money doesn’t fall out when the tail isn’t turned and it also doesn’t turn the tail by itself.
You can pose the teddy bear by moving the arms, the head and the legs. Thus, he can both sit and stand on your bed, shelf, desk or wherever you’d like him to be.
I’ve built the teddy bear with 1457 parts, of which 236 for the head, 605 for the body, 172 each for the arms and 136 each for the legs. All parts are existing in the used colours and last released in 2020 (except of part 43708 in 2019). The teddy bear measures standing 40 x 16 x 40 studs standing, respectively 40 x 26 x 28 studs sitting. He weighs 1099 g.