The Pantheon is a building in Rome, Italy, commissioned by Marcus Agrippa during the reign of August (27 BC - 14 AD). The building is circular with a portico of large granite columns. A rectangular vestibule links the porch to the rotunda, which is under a coffered concrete dome, with a central opening (oculus) to the sky. Almost two thousand years after it was built, the Pantheon's dome is still the world's largest unreinforced concrete dome. The height to the oculus and the diameter of the interior circle are the same, 43.3 metres (142 ft). It is one of the best-preserved of all Ancient Roman buildings.

The set is formed by 4 main pieces (the porch, the dome, the rotunda floor and the walls). These pieces can easily be assembled to form the complete building. I tried to make this set as much as possible similiar to the original building (the proportions, the internal arcs, the rotunda floor with the marmoreal circles and squares, ...). It was an hard work and I had to enter the real building several times in the last month :) 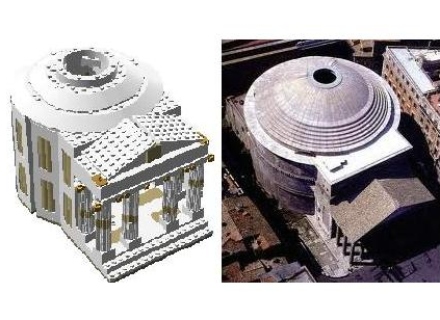 At the beginning I created this project without minifigs but later I uploaded the last pic with 5 Minifigs that can be added to set: 1 Vestal Virgin (Roman priestess), 2 Roman Soldiers, 1 Emperor Augustus and 1 Agrippa. Augustus was Caesar's adopted son and heir. He was the first Roman Emperor. Agrippa  was a Roman general and architect. He was a close friend and lieutenant to Augustus and was responsible for the construction of some of the most beautiful buildings in the history of Rome. In the set can also be added the sticker with the inscription: "M-AGRIPPA-L-F-COS-TERTIUM-FECIT" meaning "Marcus Agrippa, son of Lucius, made [this building] when consul for the third time".

So if you like my hard work or you love archeology and Roman history like me, please support my project :)

Please check the update section and take a look to my other Roman Empire projects: