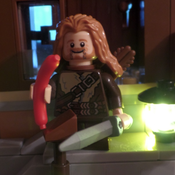 Years ago, a duke by the name of Dorr Rysendor sought to establish a kingdom and to break away from the mainland and the realm's King, who was an oppressive tyrant. Taking a watercraft made of bamboo, he escaped his domicile on the mainland of Blormyre and, over years of intense labor, he crafted this stone fortress. He found a hull of a shipwreck which gave him wood for his watchpost, unterneath the roaring falls. Soon the oppressed peoples of Blormyre escaped to join their beloved duke on his island of freedom.

That's the backstory. Anyway, this project was really fun to build, especially given that medieval/fantasy style MOCs are so fun to make. There are around two thousand pieces in this build, but it could be cut down quite a bit, since I was forced to use pieces inefficiently due to a lack of the "right" pieces.

Under the mountain is a dungeon into which the ship enters. The gates open and the boat can enter and exit through the rugged archway.

There are seven minifigs on Rysendor's island, a merchant, a soldier, Dorr Rysendor and his guard, a blacksmith, the duke's father and the duke's wife - and the cats.

Have a great day!