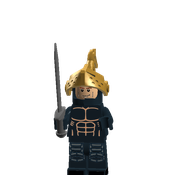 Arturian is a boy who found an ancient shield one day, while training under King Basil. The King had instructed him to take the shield to the Golden Mill of Pegasus, and trusted him to protect it. A rival group called the Rhodii sought to take the shield and use it to give their leader ultimate strength and summon the dead. Arturian tries to defend the shield from the Rhodii, but he may not be able to defend it for long.

One of the Rhodii commanders is in this set, named Dennis. Dennis is the one with the skull helmet and the rectangular shield. There is also a Rhodii warrior, carrying a pieced together copper spear. Arturian is in this set as well, seen coming out of the mill with sword in hand, ready to protect the shield.

This project is intended to be a story revolving around a hero named "Arturian". The name is suppose to sound Greek, even though it isn't actually Greek. It is a fantasy based set, that I believe would be fun to make. I would approach this set with a fantasy Greek style of architecture and armor. I attempted to get bronze as a color, but could only get copper to work in terms of appearance. If there is a bronze color for bronze tools, armor, or weapons, then that is preferred over copper for this set. I used a viking-style shield to make it appear different from the culture it is in, so that it could appear to be a Rune-like shield. However, if a Pegasus design is made, or has already been made, then that would be preferred for the round shield.

This set has an interactive story where kids and adults can imagine an ancient Greek setting and the legend of the legendary Rune Shield. This set can give other people ideas on how to make multiple archways under a single, small roof. Some small environmental decoration tachniques are in this as well (ex. stones alone the water). It also brings back some helmets and armors that haven't been used in a while.