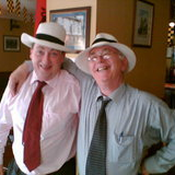 Erma is a comedy-horror webcomic by the American comics writer and artist Brandon J. Santiago. The webcomic was first published on DeviantArt on May 28, 2014, with an ongoing series beginning on webcomic syndicate Tapas on January 3, 2016. Erma has been published in the form of two strip collections and a prequel graphic novel by Outcast Studios in 2017, who also produced an animated short film adaptation in October 2017. The series is available to read in two languages, English and Spanish. Since the series’ release, it has garnered a wide cult following with over 33,000,000 views.

Erma follows the adventures and misadventures of the titular Erma Williams. Like any other normal child in the suburbs, she goes to school, hangs out with friends, and even spends time with the family. It just so happens that she, as the daughter of human Sam Williams and yokai (ghostly spirit) Emiko Williams (née Yūreimoto), tends to use her haunting abilities for everyday antics, whether for better or for worse. Each page is a new type of antic that Erma gets into and the insanity that ensues in the meanwhile. Santiago also focuses on Erma’s supernatural life and friendships with her best friends, Amy, Terry and Connor, as well as her babysitter Felicia and fellow Warrior Unicorn Princess fan Sidney.

The series can be read from the beginning at Tapas here.

This set is a Lego project inspired by the webcomic, primarily inspired by the story arc The Dentist (see below). It consists of (see images above) a dentist's office with removable roof, containing an examination room and a waiting room. It also features an exterior sign, with decals for it providing the name of the dentist's office and a picture of a smiling tooth. The examination room contains a dentist's chair, cabinet and desk; the waiting room contains a coffee table, a flower pot, several seats and a window.

The minifigures included in the set are:

Please press the support button on the right to support this project. If you do not have an account, it is quite easy and quick to make one. It is free and it also gives you an opportunity to check out and support other nice ideas from other builders. A set can only make it to 10,000 votes with your help. Please feel free to mention it to other people you know (by any form of social media) so that they too could also vote. We can do this!

Thank you for your time and interest.