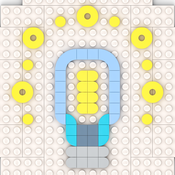 By The Author
32 comments
"Earth Exploration" set represents humanity's work and achievements exploring our planet's most mysterious and dangerous environments: the depths of the oceans, the deserts, the jungles and the poles!
The set's structure is made up of a white base, that represents the chart, and of a wood-like dark brown pedestal, which visually separates the four environments and supports the human scale compass' base.
The compass, which can simply lay on top of its base or also be plugged into it, can be opened and its hand/needle moves rotating the back panel on its axis.
The intended layout is the one shown in the main image (where the set's white base forms a circle), but the set's design allows the owner to showcase it as he, or she, prefers: round layout (the one in the main image), linear layout, square layout or showcasing it with the four sections (and the compass' base) phisically separated.
When all the sections are arranged in round layout, there is plenty of space in its center, right under the compass' base, where little parts can be stored.
I think this is a great set for children (because of its playability, the great range of colors and situations that can be enacted and the compass replica), but also for adults, who may enjoy its build and what the set represents.
A small detail: this build has aprox. 1800 pieces.

By The Author
32 comments