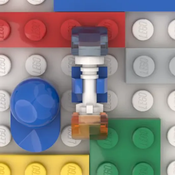 By Blue3x1
15 comments
Welcome to the little LEGO Puerto Rican street! This is a set based on the houses lining the streets in Old San Juan in Puerto Rico.
Having family there, it has always been a special place for me. I thought this would be a cool addition to LEGO, and it is something that is also special to me.
Featured in this set are four houses each with their own story and people.
Starting with the blue house is where a grandmother lives, who enjoys cooking for those who visit her. Upstairs is a Puerto Rican flag rug, and on the shelf is a collection of dolls she has made for her granddaughters.
The pink house, which features a balcony, is where a young woman lives who runs the flower shop downstairs and spends her days dreaming of meeting the young Spaniard she's been writing letters to for years. They plan to get married when he arrives in Puerto Rico, and her wedding dress can be seen next to the vanity.
The green house is where three cousins live, who enjoy playing video games together and the popular sport on the island, baseball. They also like to wear the soccer shirts their grandfather sent them.
The yellow house, also featuring a balcony, lives a man who just moved there from Spain who likes soccer (fútbol) and when buying the house also bought a piano to put in it.
Some other hidden details are the casitas (small depictions of houses) on the wall in the blue house, the cobblestone street, the coquí frogs scattered throughout and the green parrots. The set itself can fold so that it looks like the house-lined streets of Old San Juan, or you can keep it as the longer strip.