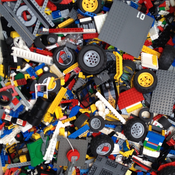 When you have a look at this cube, it don't seem very spectecular but it actually is. The cube is based on a 16x16 plate (128x128mm) and is 11 bricks (108mm) high, with a weigh of 852g. It works with a card mechanism, which isn't new at all for LEGO- safes but it's a improved version. Later on I'll explain the functionality along the pictures I took. The cube is execpt three small gaps for the flaps to swing out completely smooth.

First, you open the flap at the front . Then you use the "card tool" and put it into the opened slot. For a better view I removed the cover from the top, that you can see how it works. When you push in the card, it pushes out the drawer underneath it by a simple lever mechanism. The drawer is pushed out by one brick lenght, so it's easy to pull it out with the hands.

But thats not all because if you just use the card to open it, you will fail. The drawer is hold by two bolts, which grasp in it, so it is blocked. To retract the bolts, you have to push two sleds on the side into the cube, which are connected with the bolts by a lever. After the bolts are retraced, you can use the card to get the drawer out.

The drawer itself is connected to the cube with two grey connectors at the back that it's not just sliding out. It has a compartment in it where you can hide anything you want. The compartment is covered with five 1x6 tiles which can be removed easily.

To make the system descriptive, I added pictures of the different steps and units. Beside the main picture, which shows the cube in total, the other pictures will be explained now.

Picture 2:
Here you can see the cube from the front with the opened slot so you can put in the card.

Picture 3:
This is the card to activate the lavers to push out the drawer, it is 63mm wide, 104mm deep and has a height of 10mm. On the top it's covered with tiles so that it can slide in well. The last row is recessed to make it easier to pull it out again.

Picture 4:
This is the slot with the removed top that you can have a look at it. It's lined with tiles to garant a smooth sliding. At the rear end of the slot you can see two grey Technic levers.

Picture 5:
This is the slot with the card in it, the card's ends touch the levers but don't push them back yet.

Picture 6:
Now the lavers are pushed back and the card is completely in the slot. You can see that the card's ends fit perfectly into the slots back.

Picture 7:
The card is here in the position of picture 6, but the cubes top is back on it. As you can see the card stands out two knobs to take and remove it.

Picture 8:
The drawer is pushed out one row of knobs by the levers, so it's not hard to grab the sides and pull it out of the cube.

Picture 9:
This is the opened flap with the bolt and a lever. You can see one row of stones pushed in, which removes the bolt out of the drawer. To save it again, you open the flap and push the bolt back in, the row of stones will move back to his normal position and is indistinguishable from the rest of the wall. The same mechanism is on the other side of the cube for the second bolt. Behind the flap which you can close after the bolt is pushed in, one row of bricks is spared out, that the flap can open trouble-free.

Picture 10:
Here you can see thebolt in the drawer, underneath it the row of stones which has to be pushed in.

Picture 11:
Now the bolt is retracted and the drawaer is free. Underneath it you can see the part which has been pushed in.

Picture 12:
This is the pigeonhole for the drawer, the two grey Technic- arms are the bolts which hold it.

Picture 13:
This is the drawer from the front. On the bottom on the left there is one of the wto holes fro the bolts. The top is covered with tiles that it's sliding in and out smoothly. It's 48mm wide, 112mm deep and 48mm high.

Picture 14:
Here you can see the back of the drawer, with the other hole for the second bolt. There is also the brick modified for the two connectors.

Picture 15:
The last picture shows the compartment to hide anything you want, except elephants and other large things of course because it's 32mm wide, 40mm deep and 25mm high.

Well, that's it for this project. The colours may not be ideal because those where the ones I had most bricks of, but I think we can change that.
I really hope this cube gets 10.000 supporters to bring it into the shops, so if you know somebody who always wanted a LEGO- safe, tell him from this.

Have a great day and please leave a support, I would be very glad about that!