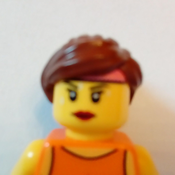 A rolling bee hive? 'How dumb', you're probably thinking! But, that's where you're wrong because you can put your Lego chairs in and place your Lego character on them - it's just like a rolling fortress. I was inspired by a brick that came in the 2018 Lego City Police Starter set but I didn't have enough bricks so I used Lego Digital Designer to make my idea. I think I will get 10,000 supporters because I haven't seen anything like this on Lego Ideas or in store. I hope all of you get the 10,000 supporters you need!