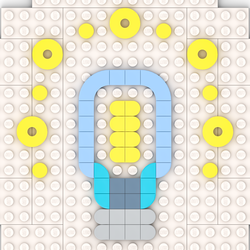 "Fall Guys" is a product idea based on the popular party game Fall Guys: Ultimate Knockout.
I loved the original game since the first second I played it, and I think its playfulness and its aesthetics would perfectly fit the LEGO ecosystem.
Inside this LEGO version of the game, your aim is to reach the end and grab the crown, every player controls a mini guy, rolling a dice to move it through a path filled with obstacles or to animate such obstacles in order to stop other players.
Players can change obstacles' layout, the golden crown at the end can be easily removed from its transparent base. (this set has approx. 400 parts)
75
266
days left