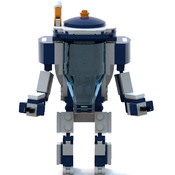 The survivor from Aurora went to crash zone, with a hope that someone might be still alive, he began collecting resources and then he heard a roar, not a normal raor, it was deep, and really loud, he hopped into his seamoth and saw the beast that made the noise, the reaper leviathan

-Every Part is Moveable

-You can move it's Jaw and upper Mouth part Too

-You Can put Minifigure in it's Mouth

If you would want to see this in real life build from non-virtual lego bricks you can support it, share it with anyone, so it could get a chance being a real lego set!

Thanks for your attention