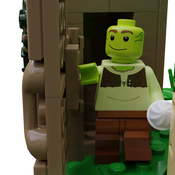 By Creep800
36 comments
I built this project because Shrek, Shrek 2, and Shrek: Forever After are movies that are very close to my heart. I watched these films all the time as a child and Shrek 2 is one of my favorite movies of all time. I also think that the Shrek series is very popular even now that it has ended. I also made this project because this year (2021) is the first film’s 20th anniversary so I made this love letter Lego Ideas project to the Shrek franchise, except Shrek the Third as I strongly dislike that movie and am not alone in that opinion.
The set includes:
Five minifigures, Shrek, Fiona, Puss in Boots, Fairy Godmother, and Farquaad.
A Donkey build.
An outhouse.
Shrek swamp house with modular roof and full interior with a ton of references, a few are the deal of a lifetime, Fairy Godmother’s business card, and the fairy tale creatures wanted poster and many more.
I think this would make a great Lego set because Shrek is such an iconic franchise and getting Shrek’s house, outhouse, and the fun characters of the Shrek series.
This model was made in Mecabricks and rendered in Blender
Thank you to my sister who provided the decals used for the minifigures.