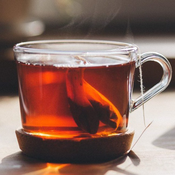 By RedTea
28 comments
Greet
Hey there!
Haven't submitted anything for a loong time. You were missing me, weren't you?
No?
Ok.
I will try not to disappear for such a long time again.
Sets bricks were taken from
Too many! The set was mostly based on the blue bricks from "LEGO Creator 7346: Seaside House".
The original set and my opinion
I wasn't a huge fan of "Creator" as a kid, but some sets are really unique and remarkable. The "Seaside House" has a very cozy atmosphere, mostly created by the unusual blue shade of bricks of the walls. The set contains many parts that can be used for sea and/or beach scenes or builds, such as a gall, a crab, wave elements, palm elements, torches and many more!
The model's features
I used blue and white bricks to create the walls, white styles from the "Pirates Chess" for the floor and bricks from other sets to make the furniture. I also used fluorescent part from "Escape from Mirkwood spiders" for the lamp.
Dimensions
336 bricks
1 minifigure
4 rare bricks
Your feedback
What do you guys think about this one?