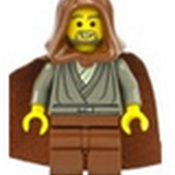 Usually, this can only be built and experienced by astronomers and scientists, but with a great set like this, anyone can experience the awesomeness of the Voyager 2 space probe!