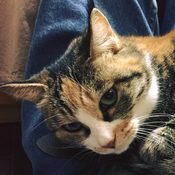 By paranoider
263 comments
== Overview ==
This is the Dancing House in Prague designed by Vlado Milunić and Frank Gehry (wikipedia). It's also called Fred and Ginger, because the two towers of the house resemble a pair of dancers.
== Background ==
I visited Prague when I was a kid and was amazed by its city views. This city has Prague Castle, Charles Bridge, astronomical clock... but what also deeply impressed me, as a kid, was this weird-looking Dancing House. After that, I've also seen many inspiring buildings designed by Frank Gehry, but the Dancing House has always been one of the most impressing buildings to me. The curved glass surface is so elegant, and I also love the posture of Fred and Ginger (the two "dancing" towers) and their vivid interaction. It's at the intersection of 3 streets, a bridge and a beautiful river, so the location makes it draw even more attention - it's just impossible to neglect it.
== Details ==
This build consists of ~2,987 bricks (I lost track of the accurate number when decorating the surfaces with the curve patterns, but it should be within ±10 bricks).
Fred
All the 6 levels of the "Fred" tower can be rotated. It makes the building's look more dynamic, and also you can see the inside of each level by rotating their opens to the outside. Unfortunately I didn't decorate the interior of them due to the limit (3,000) of the number of bricks. I also don't know whether they are hotel rooms, offices, or restaurants, but I want them to be hotel room in my build :-)
The top level of the building facing the river can be pulled out like a drawer. I made some interior decoration and it became a nice, small, modern office, with 6 office desks, a meeting room, a micro kitchen, 2 dining tables, and 2 restrooms. The other levels are fixed, also because of the size limit. But you totally can turn them into "drawers" like the top floor and make your own decorations if you have materials.
Ginger
The "Ginger" tower uses transparent tiles as its curved glass surface. The outdoor pillars on the ground floor each connects to the ground and ceiling by 1 stud respectively, so they can be rotated to the same directions of the glass surfaces. I did cut a wedge plate and made it a customized one for the surface to make it look more smooth.
Roof
The roof turns out to be quite complicated, although I rarely see it in photos. The roof consists of mainly two parts, and each one has its own complicated shape. I even managed to mount a giant AC on the roof and it fits nicely :-) There are some simple dining tables and chairs on the rooftop balcony, where you can put your favorite minifigures. The "Fred" tower's top is an observation deck with several binoculars and a giant sculpture.
== References ==