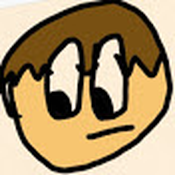 Hi, guys, I'm back with another set this one is about the giant robot from a webtoon called Eddsworld. This was made to look accurate to the original. This build has a cannon/rifle on one hand and a claw on the other, the robot here is also fully poseable. The head is able to open and you're able to put Tord in it. There are also minifigures of Tom, Tord, Edd, and Matt.