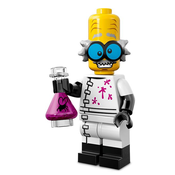 Hey! Thank you for checking out this project! Read below for detailed information! If you like it, please press a support!

Special features
Easily removable top  -  to get access to the inside

Removable lamps (2 on each side) - to give light when dark

Lever as gear shift  -  for a more realistic experience

The licence
NOT BASED on my OWN THOUGHTS! - The model is a recreation with LEGO of a car seen in the movies I talk about below.
This project is based on two movies: "Hotel Transylvania" and "Hotel Transylvania 2". The films mentioned before were made by Sony Pictrues Animation and were distributed by Columbia Pictures.

I think it would need 7 minifigures:

1. Blobby - the one on the rascal
Either make a creature that looks like him in the movie, or make a sticker for my custom Blobby on the picture.

4. Invisible man
It could be a minifigure made out of white transparent parts

6. Frankenstein
A big one

Thanks for checking out
If you like the idea of this being a set, go ahead and support my project!
If you haven't seen the movies yet, go watch them, or take a look at their trailers.