The Tournament of Colors LEGO Board Game 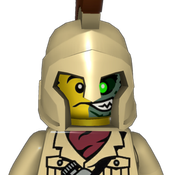 By LegoMasterJayden
5 comments
The tournament of colors is a 1-8 player turn-based game with three modes: tournament,free-for-all, and monster fight(single player). This game has a few aspects inspired by LEGO designs and a LEGO theme but most of the time its my own work. If you need clarification this game uses turns. This would be a good LEGO set because there are very few LEGO board games available for purchase.
Instructions:
The aim: The aim of the game is to defeat all other colors and be crowned champion with the golden helmet.
Turns: For turns, only the colors or players in the arena move or attack. In a turn the players in the arena may move either two studs in any direction or move one stud and attack once(you may also attack then move) or just attack twice. For weapons there is a bow and arrow, a sword and a shield. These weapons are in the back of the color palette(the part that is colored specifically) the bow and arrow does one damage and can attack two studs in any direction and does one damage, the sword can attack one stud in any direction but does two damage, and the shield can push anyone within one stud back one stud in any direction this is for attacking because you could push a color into lava (the transparent orange bricks). Another thing about the shield is you gain one extra health with is equipped. For each round you may choose a different weapon or keep the same weapon.
The modes: The three modes are tournament(in the tournament mode there are 2-8 colors and the game starts with the first battles where it goes from from top left to top right counter-clockwise or left to right in later battles. In each battle the two colors fight and the color who loses all their health loses and the color who still has health wins and moves on to the next fight like a tournament, until the color that wins the final battle moves to the golden space in the tournament board and is crowned champion. to symbolize a colors position move the color marker on the tournament board to the next fight and the losing color stays where they are.), Free for all(a one battle game where all the colors are in the arena are in the middle at once and the last man standing wins.), and monster fight(a single player mode where the monsters(the dark green colors) are randomly placed, the monsters have three health as represented by the studs on their heads and attack in any direction (whenever you are within one stud of them they do one damage)
Extras: The health for each color is represented by the flat brick with the six studs(one stud=one health)when health is lost remove the right amount of studs. Also, if you move into the lava you take one health and move out on your next turn(this does not count toward your turn). When a weapon is equipped take it from the armory and pace it on the characters head.
If anyone has questions or needs clarification then feel free to leave a comment.